The Verdict is In: Johnson County Courthouse is a forward-thinking, Community-oriented Judicial Building.

American Direct >> The Verdict is In: Johnson County Courthouse is a forward-thinking, Community-oriented Judicial Building.

The Verdict is In: Johnson County Courthouse is a forward-thinking, Community-oriented Judicial Building.

Johnson County, Kansas, includes 20 cities, six public school districts and seven townships. It covers 477 square miles and is the most populous county in the state of Kansas. In fact, the population has increased ten fold over the last 69 years. In 1952 when the first official Johnson County courthouse was built, the facility had two courtrooms, a jail and three judges. Two building wings were added in 1954 and 1968 along with an eight-story tower in 1975. Fast forward to 2016 and this powerhouse county was ready for, and in need of, a new courthouse.

“We had what I called a ‘Door & Hardware Summit’ with American Direct where we had detailed conversations about each door opening. We would discuss whether the door would need card access, did it need a kick plate, should it have an alarm if it opened, and other technicalities critical to function.”
– Alan Moore, JE Dunn

Read the entire article from issue #30 of Total Access Magazine 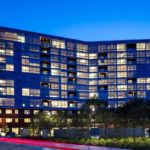 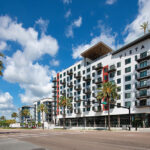 Renters at Vista Brooklyn Have All They Need in “Jax”