The University of Houston is a state research university and the flagship institution of the University of Houston System. The university spans 667 acres in southeast Houston and is home to nearly 41,000 students. This institution conducts nearly $130 million annually in research and operates more than 40 research centers and institutes on campus. Interdisciplinary research includes superconductivity, space commercialization and exploration, biomedical sciences and engineering, energy and natural resources, and artificial intelligence. The economic impact of the university contributes more than $3 billion annually to the Texas economy, while generating about 24,000 jobs.

The Quadrangle, also known as the “Quad” residence halls opened in 1950. They were enjoyed for many generations — in fact, the alumni who stayed in the Quad rave about their experience there, but the physical appearance of the Quad had been declining. In January of 2019, all of the Quadrangle buildings were demolished and new construction began to replace what once were the oldest housing buildings on campus.

The new Quad consists of seven different residence halls constructed to accommodate 1,200 students. Each residence hall unit consists primarily of four single-occupancy bedrooms, a shared bathroom and a common living area with a kitchenette. Each residence hall also includes a student lounge, multiple laundry facilities, a workout room and a variety of study spaces distributed throughout the buildings.

Included in the seven buildings is the Townhouse building which accommodates international students and “learning communities” associated with different academic programs and departments. Configured as conjoined three-story walk-up units, each Townhouse provides residency for 18 students and includes single occupancy bedrooms, several individual and group bathroom facilities, a large living space for relaxing and/or group study, and a full kitchen capable of serving all of the occupants.

Research shows that students living in campus housing tend to do better academically and graduate in higher percentages in four and five years and their overall college experiences are happier ones. The new Quad features four unique outdoor courtyard areas, named after the original residence halls within The Quadrangle; Bates, Law, Settegast and Taub. Although the original Quadrangle no longer exists on campus, the history remains through the new Quad.

Austin Commercial was the general contractor for The Quad and they were familiar with the opening solutions that American Direct and AccessNsite had provided for the Sugar Land campus and for the Katy campus (while partnering with Skyhawk). Their organized and effective work to provide Division 8 and 28 products on those campuses strengthened the decision to utilize them again on The Quad.

Prior to that decision, the master specifications for The Quad had sat idle for some time. Austin Commercial Senior Project Manager Bill Brown says, “American Direct and AccessNsite provided feedback that the master specifications should be re-written. They helped us identify the problems, helped us mitigate those problems and come up with a complete redesign, all within the confines of the schedule and the current expectations of the University of Houston.”

The collaboration between the project managers across the entire design team was imperative. American Direct Client Account Manager Kellie Volz says, “I met with Austin Commercial Project Coordinator Jordan Price every week in addition to supplemental meetings as necessary so we could always be on track. We provided more than 2,000 doors on this project and construction for all seven buildings was happening at the same time, even while students were on campus.” These meetings allowed Price and Volz to continually review the product selection and the functionality for each opening, ensuring successful results for the owner. “We gave the client a lot of help with hardware choices and it was successful because Austin Commercial acknowledged our expertise to make the best decisions about the openings and that is how our trusted business partnerships grow.”

With so many openings and only 200 doors fitting on one truck, there were multiple deliveries. Price says, “I flirted with the idea to have off-site storage but the university had an on campus building that was not being used, so we turned that into temporary storage.”

Students and faculty were already using their “Cougar Card” as the credential to gain access to the buildings. Because of the flexibility, scalability, and compatibility of AccessNsite, the software was easily integrated into their system without having to introduce a second credential.

The Quad project was very fluid. “Everyone had the understanding that the client move-in would overlap the end of construction. We had to interface with the university’s IT department so the locks could be seen, read and fully operational before construction ended,” says Brown. “We didn’t have the convenience of 20 or 30 days to get the bugs worked out after construction ended, so we had to be perfectly aligned with the schedule the entire time.”

Brown recalls how the COVID-19 pandemic affected this job. “We were doing full blown door installation in March when COVID-19 hit. We implemented all recommendations from the Centers for Disease Control with extra toilets, hand washing stations and contact tracing if needed. We had ‘tool box talks’ for all employees about the risks of COVID-19.”

Change orders to doors and hardware are not unusual during a construction project, but the design team on The Quad was dealt a big challenge when the owner decided, after most doors had already been installed, to incorporate automatic door operators in the openings. This required a swift and powerful coordination effort between all parties involved in order to stay on schedule and confirm that the automatic door operators were added.

Brown emphasizes the importance of working with a trusted partner. “If it weren’t for the dedication to the project, their commitment to help the client when things changed and their attention to detail and overall quality for install, we could have lost schedule and we would have been scrambling. We thank American Direct and AccessNsite for everything they did to be a partner in this job.”

According to AccessNsite Vice President – Enterprise Systems Brian Ashley, the success at Sugar Land, Katy and now The Quad have evolved AccessNsite access control software to being listed in the master specifications for all university construction projects moving forward. 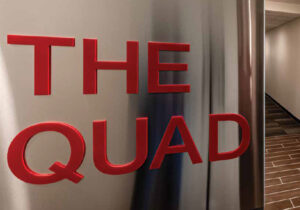 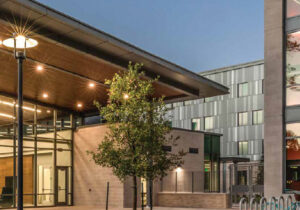 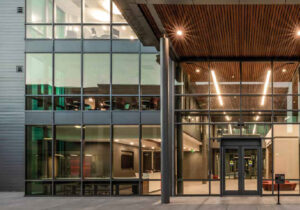