When students begin the search for their “home away from home” during their first year at college, they are looking for more than a dorm room. They are looking for a residential community to belong in. This community may initiate with their actual room, but quickly extends out to those they will be neighbors with, common areas to study in, places for social gatherings, and convenient dining areas — all with bright rooms full of natural light.

Russell Hall began housing University of Georgia, Athens (UGA) students in 1967. By 2015, the 10-story building was tired and unable to attract aspiring students who wanted to live in more modern accommodations. UGA was facing one of its largest freshmen classes on record and something had to be done, so they went to work to provide an inviting living environment.

All of these changes were a reflection of the university’s mission to support residents academically. And, the residents surely don’t mind the brand new look and feel of the interior. Designers used iconic furniture styles and patterns inspired by the 1960s to carry the mid-century motif throughout the common areas.

Menefee Architecture and Juneau Construction were tasked with keeping the structural integrity of the building, but creating an updated, modern housing experience for incoming freshman students. Unique, mid-century gems in the building were preserved, like the original terrazzo floors in the lobby.

Juneau Construction teamed up with American Direct to provide doors, frames, and hardware. The direction from the owner was to reuse locks, doors, and frames where possible. Juneau’s Construction Engineer, Blake Spiker says, “We had to make the old work with the new and vise versa. Many of the frames were not labeled because they were so old, so we had to have them inspected to see if they could hold the fire ratings. If we could reuse them, we had to make sure that the door we scheduled would fit the frame, and American Direct helped us do that.”

American Direct’s Project Manager, Megan Homewood, provided guidance by doing a complete inventory of all existing locks to see what was salvageable. Homewood also created an extensive spreadsheet for Spiker to use with placeholders for detail about every door opening including jamb depth, placement of hinges, anchoring requirements, opening height, strike location, height and width. This spreadsheet was critical in the decision making of what could be saved.

Renovation projects can be like those curious box of chocolates…you never know what you’re going to get into. Spiker says, “So much is unforeseen with a renovation project. You don’t know what you are dealing with until you are actually working on the job. Some of the frames looked fine on the exterior, but because of their age, some had rust damage that you couldn’t see until the multiple coats of paint were removed.”

Homewood says, “With a 50-year old building, you can’t be sure when the material was fabricated. We needed that information to assess the locks they wanted to reuse to make sure the new doors would be able to receive the salvaged locks. We developed creative solutions and used special ordering techniques with our manufacturers to fit the owners’ needs. This included special sizing and fabricating special anchors on the frame which allowed us to install a frame on an existing wall condition.”

American Direct’s Regional Sales Manager, Southeast, Jason Plotner, says the cost savings with salvageable product was significant, however, the coordination necessary on the front end is critical and there is no room for error. To be absolutely sure, Plotner requested that Spiker send him one of the locks they wanted to reuse so Plotner could verify the machine prep that would be necessary for new wood doors. There were many issues, like this, that needed to be addressed early enough for a well orchestrated plan. Plotner also attended a pre-installation meeting to discuss delivery and the entire scope of work.

One challenge the renovation team faced was on the unit entry door frames. After the existing hollow metal frame was removed, American Direct had to have special knock down drywall frames manufactured with a special 4 in. face dimension in order to maintain the existing door size, but cover the damage to the walls left from the demo of the existing opening.

Plotner says, “This non-standard frame required coordination between American Direct and CECO to ensure that these frames could be fire rated. Good communication between our order entry department and the factory was crucial to ensure the frames were ordered and manufactured correctly.”

In addition to product provided by American Direct, the project owner requested to use some hardware from a specialty company. American Direct took all of this into consideration so that all doors, frames, and hardware would be compatible and at the same time provide the functionality, look, and feel that was the owner’s goal. American Direct faced the challenges of this renovation head on and is poised to continue assisting renovation and new construction in the student housing industry and beyond. 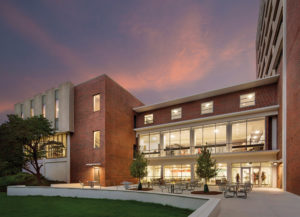 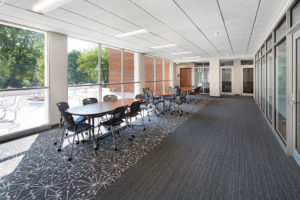 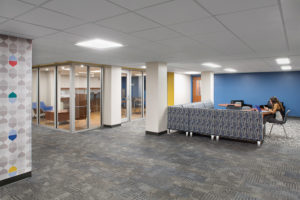